The story behind the development of the Variable Valve Timing

NextThe story behind the development of the internal combustion engine pistonNext

Defeats are what Create Real Greatness. World Class Technology Boosts the presence of Aisin in the Global Market

Among them, the variable valve timing (VVT) actuators have attracted a lot of attention in recent years.
VVT is a process that alters the timing of valve lift events according to the conditions of the vehicle, and is often used to improve performance, fuel economy or emissions.

Aisin started to develop VVT in 1986.
The first model with Aisin’s geared VVT actuator was Toyota’s Corolla that hit the market in 1991.

The gear-type VVT had a poor reputation.
It had unsolved disadvantages, and that ousted it from the competition with other vehicles.
It kept losing games. No one had a solutions. The situation got to the extent that rumors heard offstage—“The team will soon be dismissed unless they solve the problems.”

A VVT works in a system that uses mechanical gears or hydraulic vanes (See the figure below). The gear-type VVT was the mainstream until the mid-1990s.
It has some drawbacks—high machining accuracy was required and the mechanism tended to be complicated and bulky.
Gear-type VVTs inevitably produce considerable friction and are slow in response. To circumvent these negative factors, Aisin, in 1986, started developing a compact, light-weight vane-type VVT.

Back then, no vehicle had a vane-type VVT. The project, which had proceeded to the phase of prototyping, was hindered by technical difficulties, failed to produce anything as efficient as the gear-type VVT, and eventually, was put on hold.
Engine System Engineering at Aisin decided to shift to the gear-type like other component suppliers.
And, the VVT that employed gears was a losing effort that earned a poor reputation.

Early summer in 1995, Engine System Engineering was forced to choose between gear or vane.
“No choice. We have to drop what we developed. Let’s go the other way.”
The vane-type VVT left on hold came back to center stage.

The new project targeted a straight 6-cylinder engine to be launched by Toyota.
In just about two months, the team members created a system meeting the performance and cost requirements.
Their work was entered in the competition with high expectations.

However, again, the team failed to please the goddess of victory.
The winner of the game was a competing company that presented a system similar one in terms of the performance and pricing.
“There’s no way that our technology will turn into a product……”
Disappointment spread among the project members.

“Why Don’t we look at the global market out there?  We are going to play games in Europe.” Winning a race with a Renault equipped with Aisin’s VVT was the first step

The head of Engine System Engineering encouraged the team members to go ahead.
“Toyota may be a giant, but there are a lot of auto manufacturers out there around the globe.
Why don’t we look outside the domestic market?
Europe is a big market. We’re going to play games there.”

His words marked the restart of the project. In November 1995, the team flew to Europe and made visits to all the auto manufacturers there.
Aisin was not a brand known to them. It was hard to find a manufacturer willing to have talks with someone from the company.

Only Renault Sport, the motorsport, performance and special vehicles division of Renault, showed some interest in the VVT system of Aisin.
Early in 1996, the first cars from Renault Sport equipped with an Aisin-made VVT won a race.
That was a turnaround. Aisin slowly came to be known to European car manufacturers and started to receive orders from Renault.

The Vane-type VVT took its first step, but there was long a long way to go until its great success.

Perseverance convinces BMW. But the team faces a tall order.

Upon the third visit to BMW, Munich, they got an opportunity to present the vane-type VVT.

After a series of negotiations, the German multinational company requested Aisin to work with local parts suppliers to furnish technical details in a package, indicating that it recognized the superior cost-effectiveness and responsiveness of the vane type over the dominant gear type.

But, it was just a start.
BMW required “a VVT on the exhaust valves as well.”

Early and late exhaust valve closing can also reduce emissions. A system with a VVT also for exhaust valves would be more efficient and detailed in terms of the exhaust control. That was what the auto manufacturer wanted. Though, there was a lot to technically overcome. Back then, no vehicle with exhaust valve control existed on the market.

To make what has requested happen, the vane home position had to be set at the largest angle to allow the valves to open and close earlier than standard in the exhaust VVT.

The requirement, in short, was to position the vanes at the largest angle even when no hydraulic pressure is applied.

Think the other way around. Leveraging the troublesome flip-flop

“Water flows from top to bottom. They are asking pretty much the same as reversing the flow of water.”

The project team had no easy clue for a solution and struggled.
Then, a sudden inspiration came to mind.

Because of its construction, the friction mechanically produced in a vane-type VVT is very small. That allows the vanes to flip-flop randomly when no oil pressure is applied. There had been a locking mechanism incorporated to prevent that behavior.
What if that mechanism is used for the exhaust VVT?

It was one month after BMW’s request when the preliminary drawings were submitted.
Aisin was the only supplier that met the requirements.

The team wasted no time. They started to modify the engine and built a prototype VVT—what typically thought to take three months was all done in two weeks.
On the day of the testing, one of the members turned on the start switch with a mixed feeling of expectation and anxiety.
A rattling was heard, then, there was a silence.
That was the proof indicating the lock was operating at the largest angle.

Born was a long-awaited VVT that would outperform competitor products.

But, that was not the end of the story.

A fax message spells urgency & trustworthy partnership opens up a path to a solution.

In January 2000, the members were at BMW’s headquarters in Munich to attend, for the first time, the project meeting scheduled every Thursday.

Challenges were piled up on the desk.

They had offline meetings to discuss strategies and issues during test-runs of 400 km in a car running at 200 km/h on an autobahn connecting Munich and Frankfurt where Aisin Germany was based.

They prepared meeting reports right after coming back to the office and sent them to Aisin in Japan. The time difference between Germany and Japan worked, in a positive way, allowing project members at home to know what was dealt with in the meetings by Friday mornings.
A lot of information and data were shared among team members in the West and the Far East.
Everyday correspondence built a trustworthy relationship.

One day, a fax marked “Urgent” came in, addressed to the team members in Japan.
It was from Frankfurt.

“The vanes in the intake valve VVT do not return to the default home position, i.e., the smallest angle.”

The symptom reported in it represented a major trouble, but the recipients were puzzled.
Nothing similar ever occurred in tests done domestically.

Local staff collected information. It turned out that a new variable valve lifting implemented by BMW was the cause of the symptom.

A variety of solutions were tried, but none hit the mark.
“We are obliged to ask you to change the control via the engine” was the final answer.

The project leader at BMW insisted “The VVT is the component that needs to be changed to deal with the problem,” when the vehicle components designer at BMW came in.
He had confidence in what Aisin was doing through the relationship built through over 30 visits and said,

“Theoretically, there is nothing they can do with the VVT.
It’s best to deal with this problem via the engine control.”

The comment convinced the project leader.
The genuine partnership opened up the way to a solution.

Defeats and struggles pave the way to becoming a global player

How to mass-produce the VVT? It was another question that contained many challenges.
Europe was not the arena where Aisin had expertise in quality control, design requirements, and process audits.
The project members, production engineers on-site and component designers worked hard, leveraging everything they had, to cover the entire scope applied to auto component suppliers.
The first BMW vehicles with Aisin VVT came off the line in the spring of 2000, marking the start of mass-production.

The vane-type VVT from Aisin became a popular choice for models released by Renault, Daihatsu, Volvo, and needless to say, BMW, contributing to steady sales increases in markets in Europe.

The experience and expertise through quality control and low-cost component development with BMW offered helpful tools to make an entry into the North America market and win a purchase order for mass-produced VVT from General Motors.

As a global commodity, 120,000 vane-type VVTs were sold in the initial production year (1998), and the number surged to 1.5 million in 2003.
Today, a total of seven auto manufacturers have models with Aisin VVTs, produced on a scale of 2 million units annually.

The VVT segment has grown into one of the main pillars of Engine System Engineering.
What made this happen was the team spirit, perseverance, and enthusiasm that the members of the project all shared.
The days of defeat were what paved the way to today’s Aisin, a powerful global player. 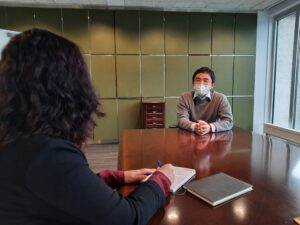 Interview with Yosuke Tateishi, Aftermarket Senior Coordinator Please tell us more about you: what is